Captain Sean Lawson glanced down at the body of Kyle Miller, his best friend. Or at least he had been at one time. Now the two men hunted one another, made enemies by the government they both served. A noble medical experiment had failed. He’d recognized the truth after his first death. Why couldn’t Kyle see it? He shook his head, disappointed.

Kyle stared into the mirror, examining his new face and body. Would he succeed this time in catching the traitor, putting an end once and for all to Sean? That’s all he lived for these days. His old friend had turned against everything they both believed in. Why? And how could Sean have killed the woman he loved?

It’s the year 2096, and nations no longer exist as separate entities. Regional Powers are now the norm, huge entities vying for dominance through any means at their disposal.

A Nightmare’s End is a suspenseful semi-thriller novella, an action-packed adventure. 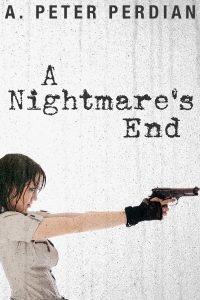