Katie is terrified of the massive devastation spreading like wildfire around the globe, threatening humanity, threatening to bring down civilization, but she refuses to give into her fear. She’s determined to stop the cataclysmic events that are taking place before it’s too late. Though no one believes her, not even Phillip, she knows who’s responsible. It’s the Earth–a vengeful Mother Earth is awake at last.

Phillip, leader of a government team tasked with getting to the bottom of the horrific destruction that’s endangering life on Earth, is alarmed he won’t succeed in time. As he skirts constant peril in rushing from one hot spot to the next, he’s worried about Katie, the love of his life. Her delusions not only threaten her, but his entire team, his mission. How can he protect her while carrying out his assignment?

Buried In Tomorrow is a short story, a paranormal urban fantasy. 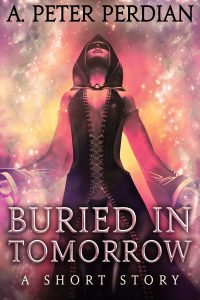