NOTE: This is book 2 of the Forgotten Creators Trilogy.

Adrian is now a fugitive, hiding with his friends from the FBI inside an elaborate cave system that was last inhabited several hundred thousand years ago. He questions whether the cave was created naturally by Earth’s geological processes, or whether Earth’s ancient alien visitors who’d been tinkering with the DNA of primitive humans had carved it out of the mountains from scratch.

Olivia is still coming to terms with what it means to die. Is the death of your corporeal existence the end? Apparently not where her friend Maya is concerned, at least not while trapped in this cave system with its alien technology.

Special Agent Lee Quadsun of the FBI and biotech specialist Claire Russet have diverged on their tactics to track down the fugitives. Claire’s research leads her to believe the fugitives are now in British Columbia, Canada, and she takes off on her own for the town of Whistler without telling Lee. She’s unaware she is now considered an uncontrollable wild card by several high-level bureaucrats in the government and has been targeted for termination. 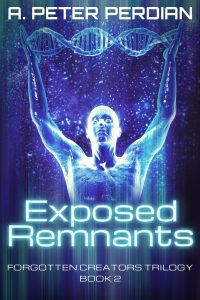