Colin Banner gritted his teeth. American Grayshirts, an arm of the government, were hot on his trail. As leader of the Resistance, he had to survive at any cost. He lied and used innocent people all the time. Why should Jena Nayman be any different from the others? But she had stopped him in his tracks.

Jena frowned. She despised Colin. Aside from his arrogance, he was always condemning the Resistance. She had no love for those fighting against the government, but she agreed with many of their objectives. She kept that knowledge well hidden, though, especially from Colin. Spies were everywhere.

Grayshirts is a novelette, a fast-paced thriller set in the near future, a dystopian future. 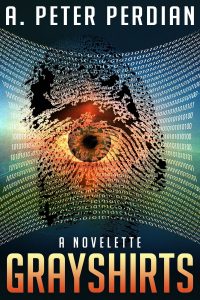