Note: This is book 1 of the Forgotten Creators Trilogy.

Maya Bonner, biotech scientist, is determined to unravel her DNA puzzle. She has discovered an ancient sequence of DNA base pairs in her genome, a genetic anomaly that shouldn’t exist. Where did it come from? Is it human? Alien? Her only way to ascertain the inert string’s original purpose is to reactivate them, a highly dangerous procedure. Is she willing to put her life on the line? Would it lead to the medical breakthrough the company needed, that the world hungered for?

Olivia Nance is concerned for her friend and colleague. Was Maya seriously considering experimenting on herself? If so, at minimum it was dangerous. At worst, it was suicidal. Conflicting emotions tore at Olivia. Loyalty to her friend versus reporting Maya to the boss, an act that would bring the FDA, FBI and maybe even the CDC down on the company.

Adrian Kinder consulted for Maya and Olivia’s company, helping to maintain their network infrastructure. He was a computer whiz, a former hacker. Though he had no problem standing up to the authorities—and rather enjoyed jousting with them—he hated being caught in the middle between Olivia and Maya. His knowledge of genetic engineering was limited, and he was friends with both women. 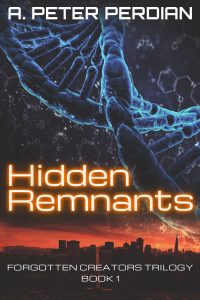