Taylor Pyatt, a renowned paleontologist, is searching for dinosaur fossils in the badlands of Montana. His companion, Jenna Fabra, stumbles upon an unusual find. As the two of them excavate more of the strange looking object, their initial curiosity turns to shock. What they’ve uncovered is neither fossil nor rock. Are their eyes deceiving them? If not, they have a sixty-six-million-year-old earth-shattering enigma on their hands, an object dating back to when a massive asteroid wiped out the dinosaurs.

Whitney Alden, another paleontologist, comes in for consultation. She’s stunned at what she sees. After finishing her examination of the find, she recommends calling in her brother, Josh Alden, to get his scientific take on the object. But Jenna argues against it. Whitney’s brother is a scientist who works for NASA, and Jenna wants to keep the government out of it. She fears the authorities will commandeer their discovery.

NOTE: This is book 1 of the Future Relics Trilogy 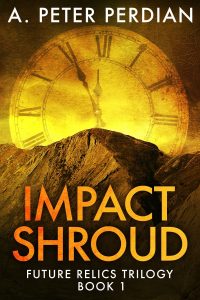