NOTE: This is book 3–the final novel–of the Forgotten Creators Trilogy.

Lee follows Claire to Canada, determined to save her from assassination. Hard on his heels is a US military detachment being sent into Canadian territory to surround the cave system where the fugitives are located. The detachment’s purpose is to ensure America alone gets possession of the alien technology.

The Canadian government soon learns American military forces have illegally entered their country to acquire alien technology. They order the US to withdraw. When the US refuses to comply, they order their aircraft to destroy the cave system rather than let the technology fall into American hands.

Inside the cave complex, the fugitives are safe, but trapped, unsure of how to escape. Had Adrian, Olivia, and Maya just witnessed the beginning of a war between America and Canada, or just a brief skirmish that would soon be settled? Either way, what would become of them? 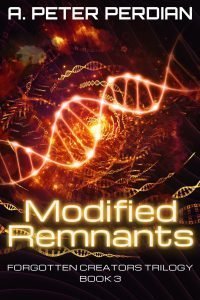