Note: This is not a standalone novel. It’s book 3–the final novel–of the Future Relics Trilogy.

Taylor and Jenna have managed to stay one step ahead of the authorities, intent on locating the third and final alien ship that crashed on the planet during the asteroid’s impact. They are also determined to let the public know about the ancient alien visitation, knowledge the government wants to suppress.

To their surprise, they’re now receiving help from two unexpected sources. However, their freedom is still touch and go as they are pursued into a snow-covered forest by a team of government CIA contractors.

While they struggle to hang on against their attackers, ex-soldiers employed by the CIA, the paramount question on their minds is whether the two new sources that have come to their assistance will be able to save them—and ensure the third alien ship doesn’t fall into the hands of the authorities. 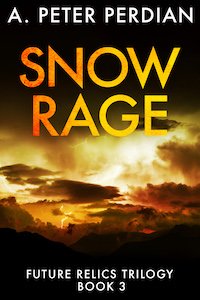