American archaeologist Eric Heaton thinks he has made a breakthrough in his excavation of an ancient Roman site. But his discovery is greater than he imagined. The newly unearthed artifact transports Eric through time to an ancient Roman villa—and into the center of a conflict that spans the stars.

Jazloo, a genetic engineer, left her home world on a mission to find a new planet for her species to colonize, to escape the impending nova that will obliterate her solar system. She and the crew of their starship have searched the galaxy for a welcoming world, but a dire emergency has forced them to land on Earth to await rescue. Thanks to Jazloo’s genetic engineering skills, she and the others have been able to masquerade as humans, as Roman citizens in the year 479 CE. But how much longer will their disguises last?

The sudden appearance of the time-traveler complicates matters for Jazloo. She wants to believe Eric is who he says he is and that some fifteen hundred years have elapsed since she and her colleagues landed on Earth—and that their only hope for rescue lies in the future. But the captain of the damaged starship has his own opinions about survival, and he isn’t afraid to use dirty tactics to get his way.

Meanwhile, a government agent from the twenty-first century is chasing Eric, suspecting him of jumping through time and space. If Jazloo and her friends are to find their way off the planet, she and Eric will have to work together to overcome the captain’s resistance and evade the authorities that lie in wait for them in Eric’s time period, the twenty-first century. Time won’t wait forever, though, and for Jazloo and her friends, it may already have run out.

Time Quirks is a science fiction novella, an adventure through history, time, and space. 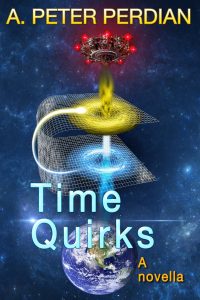